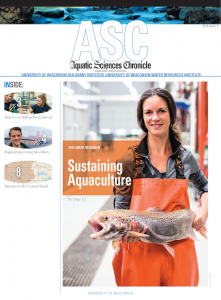 Subscribe to the Aquatic Sciences Chronicle (our FREE quarterly newsletter)

A Wisconsin Sea Grant project, “Overcoming barriers to support the growth of land-based Atlantic salmon production in the Great Lakes region,” was selected to receive part of an $11 million grants package from the National Sea Grant Program designed to further advance sustainable aquaculture in the U.S.

The total budget for the two-year project, including both federal and non-federal matching dollars, is approximately $773,000.

James Hurley, director of Wisconsin Sea Grant, will serve as the principal investigator for the grant, while Greg Fischer of the University of Wisconsin-Stevens Point Northern Aquaculture Demonstration Facility (NADF) will serve as the project leader and research team organizer. Fischer is facility operations manager at NADF, located in Bayfield, Wis.

Other partners include the Conservation Fund Freshwater Institute, a prominent research entity based in West Virginia.

Researchers will focus on two key issues that have hampered the continuing growth of salmon aquaculture in the United States – fish health and fish flavor.

Said Fischer, “Land-based salmon aquaculture is growing by leaps and bounds in North America. This research study is very exciting because it is really going to help the industry. We are working in close concert with private partners that are doing this type of aquaculture right now.”

Fischer’s comment touches upon the robust, public-private nature of this effort. Private industry partners are Superior Fresh, based in Hixton, Wis. (30 minutes southeast of Eau Claire), and Riverence/Evaqua Farms, sister companies based in Washington and Idaho, respectively.

Superior Fresh is the largest Atlantic salmon aquaponics facility in the world. Some of the research will be conducted there, and some at NADF. Superior Fresh will provide fish at various life stages, and Riverence/Evaqua will supply some of the salmon eggs.

The fish health issue the research team will address involves managing a common fungus (saprolegnia) that occurs in both farmed and wild fish.

“Various Atlantic salmon life stages are particularly vulnerable to infection, including early rearing — the fry stage — and during smoltification, when salmon physiologically prepare for the transition from freshwater to seawater,” said Good, director of aquatic veterinary research at the Freshwater Institute. “We aim to investigate novel approaches to prevent or reduce the impact of fungus at both of these life stages, in order to… ensure the health and welfare of farmed fish.”

As for the flavor issue, some farm-raised salmon can have an “off” or musty flavor. For consumers to choose farmed fish, it must have a “flawless” flavor profile, say the researchers. Said Steven Summerfelt, chief science officer of Superior Fresh, “This project will help to ensure that Atlantic salmon harvested have the very best flavor profile: succulent, buttery-rich and mild.”

Farming fish closer to where food shoppers and restaurants buy it has several benefits, including greater freshness, a smaller carbon footprint (since the product does not have to travel via air) and job creation in these communities.

At Superior Fresh, leafy greens are grown along with salmon in an efficient, sustainable way. Said Summerfelt, “We use a state-of-the-art recirculating aquaculture system technology in a ‘fish house’ and connected hydroponics ‘greenhouse’ to produce micro-greens, baby greens, head lettuce, steelhead and Atlantic salmon year-round while recycling 99.9% of the (water and nutrient) flow.”

Said Jason Mann, director of nutrition at Evaqua Farms, “We’re on a mission to help our peer fish farmers contribute to the future growth of aquaculture in the U.S. in order to provide more healthy seafood to our citizens from safe, domestic origins.”

Looking ahead, the work of the public-private research team will have impact well beyond Wisconsin.

“We expect to publish a myriad of papers out of this (research study),” concluded Fischer, “and it will help the industry as a whole.”